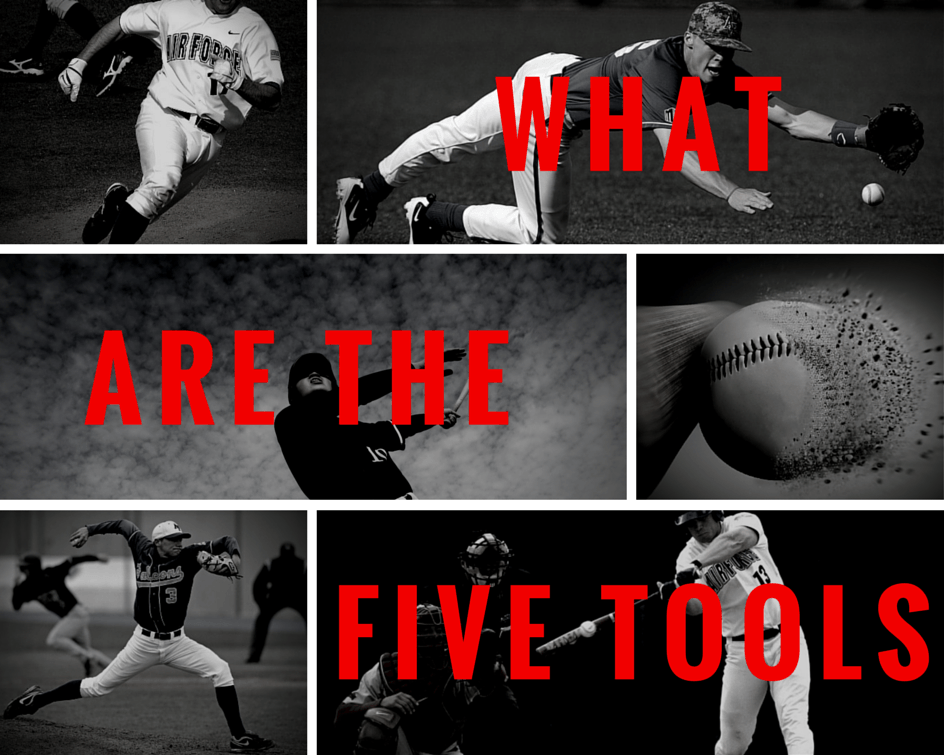 What Are The Five Tools In Baseball?

Maybe you've heard the term "Five Tool Player" before and wondered what that meant.  Or maybe you know the term, but want to learn how to achieve that lofty title. When I was a kid, I remember the first time that I heard someone use it. I didn't know exactly what it meant, but I knew that I wanted to be one - a five tool player that is.

So, what are the five tools in baseball? ​

Simply put, the five tools are the categories that scouts use to break down a player's abilities on the field. If you rate highly across all five tools, you're known as a five tool player and you're showered with love and money. Yay!

It should be noted that this applies to position players mostly, and not pitchers. Pitchers have a different scale with which they are rated.

The Five Tools in Baseball Are:​

This is what scouts are looking for in a player. Let's break each one down a little further and see how you can improve in these areas.

In my opinion, Speed is one of the more underrated skills to have in baseball. It's always the home runs and fancy web-gems that get all the glory, but when you've got a speedy runner on the base paths, they can affect the outcome of the game in 100 different ways.

Here are a few of the ways that a fast runner can change a game:

The list goes on, but you get the point.

One important thing to mention here, is that, while we are referring to this tool as "speed", it also encompasses base running in general. There are plenty of guys that aren't breaking any records in the 40 yard dash, but still grade high in this tool based on their intelligence on the base paths. ​

Players such as Dustin Pedroia and Ryan Zimmerman are not very fast, but Pedroia has the uncanny ability to read the ball off the bat, take an extra base when he sees an opportunity, and steal the occasional base on lazy pitchers who have forgotten about him.

Zimmerman, although not very fast, ​ranks among the fastest players in the league for taking an extra base.

Our Favorite Resources For Speed

Just like speed, arm strength is another often overlooked tool in a baseball player's arsenal. As a position player, you may think that your arm strength "is what it is". So long as your throws are accurate, you don't give much extra thought into improving your velocity.

However, just as pitchers do, position players can also improve their velocity through many different exercises - or even just improving on your mechanics.

Having a strong arm can be the difference between gunning a runner down from the hole at shortstop, or letting another infield hit extend the inning.

First base is just about the only position on the diamond where you can hide a weak arm. Even second basemen need a certain amount of zip on the ball to turn double plays.

Our Favorite Resources For Arm Strength

From Around the Web

Fielding your position well is KEY to having success on the baseball field, and being on a team that wins.

Let's not forget that baseball is a team sport.

So often, when writing about improving one's baseball skills, it can become easy to forget that you are just one of nine guys on the field pulling for the same goal. You have to do your job, so that everyone else can do theirs.

In all honesty, I'd rather have a guy on my team that plays great defense, than a guy who mashes homeruns. I've seen too many games blown, and thrown away, because of a few bad plays.

Plain and simple - you must work on your fielding constantly. There is never a time that you can rest, and feel comfortable with your abilities. Every day, you've got to be out there taking ground balls or shagging pop-flies. Every day.​

Our Favorite Resources For Fielding

Hitting for average in baseball means that you are doing a few things right. Things like:

If you're checking each of these things off the list, it's almost impossible not to have a high average. But these things are easier said than done.

Even the best hitters in the game go through slumps. That's why you need to have consistency and trust in your batting approach. There are systems and tools out there to help you achieve that consistency. Hopefully, this site, is one of them.

Our Favorite Resources For Hitting for Average

​Learn More ﻿﻿About Our Favorite Tees

The one you've been waiting for, right? I can't say I blame you. Homeruns are sexy. Power hitters get all the love (and media coverage). Personally, I've never hit for much power, and man, does it bother me sometimes. I'd love to know what it feels like to hit a ball like this:

Some people say that you can't teach power. But that's not true. In fact, I have an entire article on how to hit with more power.

​And the more that I put these techniques into practice, the harder I'm starting to hit the ball. My goal is to hit one home run this season. Just one. I'll keep you posted.

Our Favorite Resources For Hitting for Power

What Are The Five Tools In Baseball?

Now that you know what the five tools are, it's time to go out and put them into action!

Be honest with yourself - what are you lacking? Some guys are freaks of nature and are born with these talents, but the rest of us have to fight for them. You can improve.

The resources listed here are meant to be a constantly updated list.​ If you have a suggestion for a training aid, or a workout, or a drill that helps develop any of these five tools, please leave a comment. I'm always on the lookout for the best information and tools available.