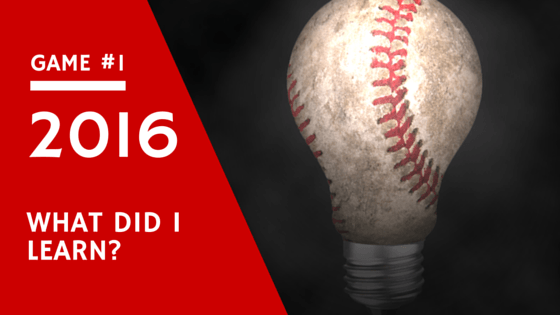 Game 1 - Hitmen vs. Snappers (yes those are the names)

This looks pretty good at first glance. And I'm happy with it, in general. But you will notice that I struck out twice during this game - once looking and once swinging. I really hate striking out - it's such a waste of an at bat. But it's going to happen.

When a strikeout is unacceptable

In a situation like that you have one job: put the ball in play. Preferably in the air - the harder the better. It's a moment that many hitters relish because you basically have complete freedom to swing aggressively.

Let me set the scene for you...

It's the bottom of the sixth inning. I'm due up fourth, and the first two runners have reached base via walk. The pitcher is a little wild this inning, is what I'm thinking. There are no outs and the hitter in front of me is smart, and he plays a little small ball, laying down a bunt. It's successful and he advances the runners with the sacrifice.

Now we have runners on second and third with one out. Did I mention it's a tied game? They pull the infield in to cut off the go-ahead run.

Normally, I go up to the plate in this situation thinking "take a hack".

But because of the two walks I'm thinking, "I might not get anything good to hit, let's see if he can throw strikes." ​

​The first pitch is absolutely mouth watering. It's up in zone, it's flat, and it's a mediocre fastball. And I take it for a called strike. LIKE AN IDIOT. That is exactly the type of pitch that I should have been gearing up for.

Now it's 0-1. No time to panic, I just need a good pitch to hit. So what's he throw me? A good curveball that I take for another strike. It was a good pitch, I'll admit that, but still one that I could have hit.

Here's where things can go a little haywire when you're in your head too much at the plate. I've seen two pitches - probably the only two pitches that this guy has. What will he come with next?

I shouldn't even be making a guess, in this situation. Instead, I should be looking fastball and adjusting to anything offspeed, and I should be protecting the plate. That's what I should be doing.

But, no, I'm guessing instead - and I'm thinking he's going to waste a pitch to see if I'll chase. I'm specifically thinking that he's going to throw another curve down and off the plate.​ So that's where I'm cheating.

I have to give the pitcher credit. He played me like a fiddle and whatever wildness he had in the beginning of the inning was apparently gone. He comes back with a fastball right under my hands - inside, but still catching the plate. Because I was looking out over the plate for something offspeed, I can't adjust to fastball in...

I swing, but can't get the barrel to catch up. Strike three.​

A wasted opportunity. Now there are two outs in the inning, the infield can move back, and we can't produce a run with an out. I don't even remember what the batter after me did, but he made an out. Inning over. Game still tied. The game ended in a tie, by the way.

There are still a lot of positives to take away from the game. For one, we only scored 3 runs in the game total - I was responsible for driving one of them in, and scoring another. That's good. That's what I will take with me as a positive into the next game.