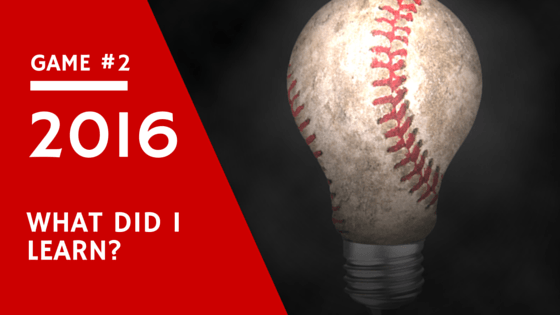 Game 2 - Hitmen vs. Aces (yes those are the names)

What's up with the Strikeouts?

If you've been following along thus far in my season, you'll notice that this is the second game in a row where I've struck out twice.

No one likes striking out. Especially me, because I pride myself on being a contact hitter​ and I don't have the type of power (or any, really) that will allow for strikeouts to be acceptable.

So how did I get myself into trouble this time around? How did a good contact hitter like myself strikeout twice in one game?​

Velocity Changes Everything, That's Why​

​We happened to be facing a few pitchers on this particular day that threw hard (hard for the league I'm in at least) - mid to high eighties, probably.

It's a hittable speed, honestly. And I don't say that to sound tough, but you can still time an eighty mph fastball even with just average bat speed. But you have to recognize the pitch early. That's where the problem lies.

When you start getting in your head about your ability to catch up with a fastball, you start to cheat rather than let the pitch come to you, see it, and react.

​It's the leadoff hitter in me. I always like to see a strike before I will swing at anything. That's a fine approach when you have good contact skills, because you don't have to worry all that much about being down two strikes. You can always foul off pitches until you get one you like.

But, it can sometimes put you behind in the count right away. And that's what was happening today. Good fastballs down the middle to start at bats. Pitches that I could have been aggressive on.

So now that I'm behind in the count, I ​get a little less aggressive, and also a little more paranoid about that fastball. which means...

​And that's exactly what I strike out on. I see a pitch that looks like a fastball out of the pitchers hand, and it's right down the middle. I start my swing early only to realize that, wait, that's not a fastball. It's a curveball and it's heading down and away.

I'm way out in front of the pitch and I can't adjust my swing in time. Strike three. ​

It's the same thing with a change up, but even worse, because those really look like fastballs coming out of the pitcher's hand because the arm speed is usually the same.

All I really needed to do is relax and not fear the fastball. I can catch up with it. I don't need to cheat and start my swing early. Lesson learned (hopefully)

A Quick Note About My Popup​

How did good velocity effect this at bat?

I was trying to pull everything that's how. This tends to happen to me early in the season. I forget that hitting the ball the other way is completely acceptable and actually preferred in many cases.

The problem is that when you try to pull a good fastball, you'd better be sure that you can catch up to it. In this case, I couldn't.

So when I think I'm going to hit it off the barrell, it's actually too fast for that, making contact with the handle instead.

Hence, a week pop up to the infield.

Velocity done messed with me today. It got in my head and toyed with me. ​