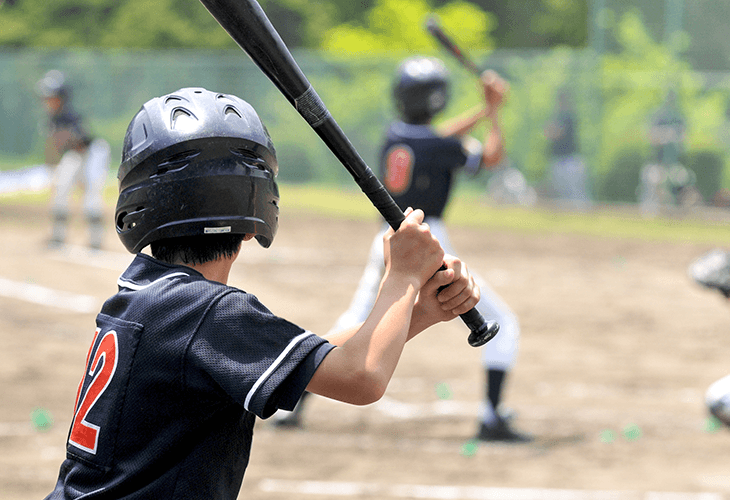 It really should be simple - how to hold a baseball bat, that is.

And, generally, it is simple, especially if you've been playing the game for a while. Most people don't give it that much thought. "Grip it and Rip it", they say. ​

But, lately, there's been two schools of thought on the proper way to grip a bat. And it seems like no one can get on the same page.​

​Let me just get this out of the way before breaking these two different grip styles down: Either way is fine. In my opinion, it's more about a level of comfort than anything else. And if you're getting the results you desire, than there's no problem.

So, let's not get too stressed when discussing the pros and cons of both ways to hold the bat.

However, if you feel as though you're not hitting the ball as hard as you could be, you may want to consider something as simple as switching the way you hold the bat. Okay, here we go...​

As you can see, the reason this style of holding a bat is called "box grip" is that it resembles a box with both pairs of your knuckles forming the sides.

This grip is very common among players of all ages and skill levels, and it's often the grip that feels the most natural​.

This is the bat grip that I had for the majority of my playing years.​

And honestly, it's the grip that you'll see the most often in video and images of professional baseball players. Especially the power hitters. This grip may be your best option for generating the most power from your swing. And power is good.

But power isn't everything, and you may find that you prefer a different bat grip.

This bat grip gets it's name from the way your "door knocking knuckles" line up vertically on the bat handle.

I had not heard of this style until I was in my twenties. But one of my teammates started praising it as the "correct" way to hold a baseball bat.

I'm not sold on that, exactly, but I gave it a try. And I liked it.

It's a very comfortable grip that keeps the bat handle close to your fingertips. It gives me a lot of bat control, which for a contact hitter like myself, is key.

And that's who I feel this grip is more beneficial to - contact hitters. It gives you just a tiny fraction more of bat control, which could be the difference between a ground ball to second base, or a line drive up the middle.

As I said before, either one of these grips is acceptable, regardless of whatever else you hear on the internet. Experiment with what feels more comfortable to you. You may find that somewhere in between these two grips is what works for you. So be it.

The Most Important Things To Remember When Holding A Baseball Bat

Regardless of which school of a bat grip you fall under, there are some things that all coaches and players will agree on when it comes to how to hold a baseball bat.

Keep the Bat out of the Palms of Your Hands​

​If your baseball bat is buried in the palms of your hands, you are strangling it! Stop you murderer!

Actually, the only thing that you're murdering is your batting average.

Because when your bat is being held that deep in your hands, you're making it very hard to make the split second adjustments necessary to barrel up a pitch that can be breaking any number of ways or headed for any number of areas in the strike zone.

Letting your fingers control the bat allows you to have much better bat control.

​Much like the aforementioned tip, keeping a loose grip on the bat improves bat control, but more so it increases bat speed, which increases power.

​Loose muscles are fast muscles - and when it comes to a baseball swing, there are a million fast-twitch muscles involved in making the bat whip through the zone.

Next time your on the field, or in the cag​e with a tee, do this little test and you'll see what I'm talking about.

Take a hack while holding the bat as tightly as possible.

Then take a hack with as loose of a grip as you can (without losing grip of the bat obviously).

Notice a difference? Of course you do. The ball should jump of the bat when you're holding it loosely as opposed to merely ​thumping lifelessly off the bat while over gripping it.

Your batting grip will naturally tighten as needed as your swing progresses. Just keep it loose at the beginning of your swing and you'll have a much quicker bat.​

How To Hold A Baseball Bat - What The Rest of the Internet Says...​

eFastball.com has a great breakdown on this exact subject. ​It's full of lots of quotes from players and coaches - some of which are quite contradictory.

Check out this video from ​Antonelli Baseball

And, lastly, this video from Don Mattingly, which flies directly in the face of what many baseball experts on the internet preach when it comes to holding a baseball bat.

So Which Grip Do I Use?​

Well, believe it or not, if you couldn't already tell by my lack of a true position on the topic - I use a grip slightly in between the two. Which I suppose is a grip that has been referred to as the "Rings Grip" elsewhere on the internet.​

Which style of grip do you prefer? Leave a comment and let us know!